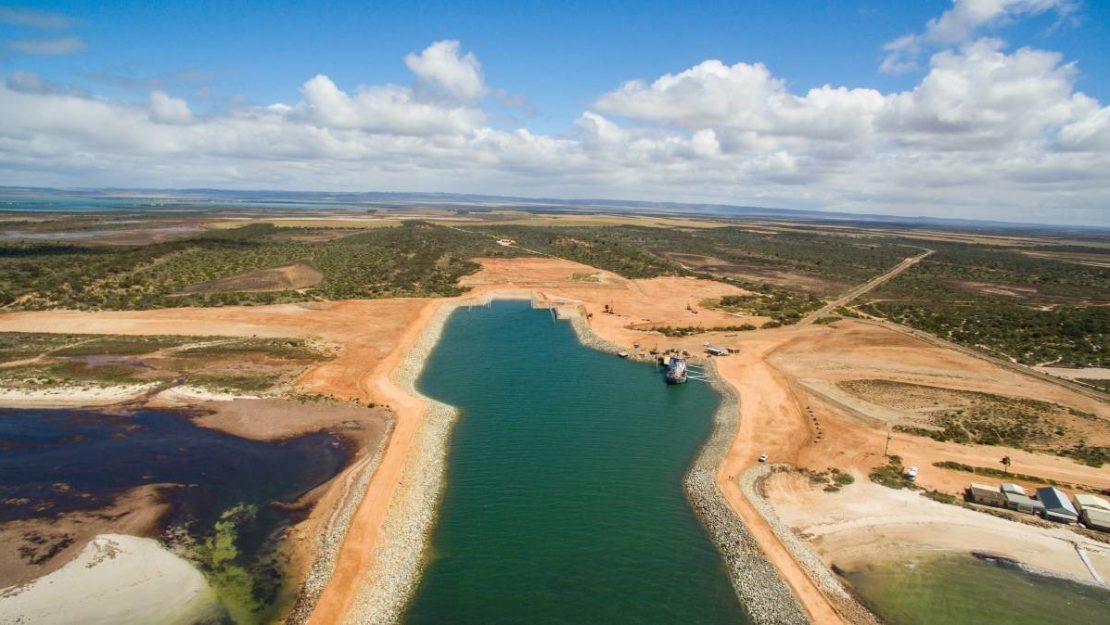 EYRE Peninsula graingrowers could be delivering wheat and barley to a new port this harvest, with funds secured for a shallow harbour port at Lucky Bay, near Cowell.

The $115-million project will include the shallow harbour port and a 430,000 tonne capacity grain storage at Lucky Bay, a 150,000t upcountry storage at Lock and a 3500t shallow draft transhipment vessel to transfer grain to a deep water vessel five nautical miles into the Spencer Gulf.

“We’re taking a port to the people,” he said. “EP has gotten excited and let down on the back of a lot of projects. This isn’t an idea anymore, we’re starting construction.”

T-Ports says the port will be “fully operational” by the 2018-19 harvest. Site preparation starts within days, with construction to begin in the next month.

Mr Chapman said one of the biggest benefits of the new site for EP graingrowers would be the introduction of competition in the grain handling sector.

“In all other industries where I’ve worked, when you introduce competition, the end winner is the consumer, which in this case is the grower,” he said.

In addition to the increased competition in the EP supply chain, T-Ports estimates graingrowers could save from $5/t to $20/t on freight costs, depending on their proximity to Lucky Bay.

He said there were lower construction costs and, in turn, the ability to begin operations with a smaller tonnage, while expressions of interest had helped create estimates of 377,000 tonnes of wheat and barley delivered to the facility within the first year.

For every tonne of wheat and barley delivered to the Lucky Bay facility during the next seven years, these growers will receive $3 worth of T-Port shares, until the scheme has reached 15 per cent equity in the company.

Other growers will have the opportunity to be involved in a retail fund, to be established by June.

T-Ports director and Lock graingrower Andrew Polkinghorne said this would help growers to share in the profits while storing and shipping their grain.

“Growers are keen to have some ownership of their supply chain,” he said.

Mr Carvill said the company had been in talks with grain traders about the facility, and while the response has been positive, there has been a wait to finalise finance.

“It’s important that growers have enough buyers on-site,” he said.

There are also plans to diversify into fertiliser imports, cutting freight costs an estimated $25-$40/t from Port Lincoln and Port Adelaide. Mr Carvill said this should be in operation by either February 2019 or February 2020.

EP-based operations general manager Tim Gurney said there would be other opportunities to diversify, with the ship to have room for 120 containers and the potential existing to transport hay or pulses directly to Port Adelaide, cutting freight costs further.

“We plan to have all bulk segregations of wheat and barley in the first year, and look to expand that in future years,” he said.

“This project has potential to unlock a myriad of business improvement.”

Mr Carvill said they had been working with the District Council of Franklin Harbor and Department of Planning, Transport and Infrastructure to ensure there would be no negative effects from extra trucks in the Cowell and Lucky Bay region.

“It’s also taking about taking trucks out of the centre of Port Lincoln,” he said.

While the focus is on the Lucky Bay facility, Mr Chapman said they were also investigating a second site on Yorke Peninsula.