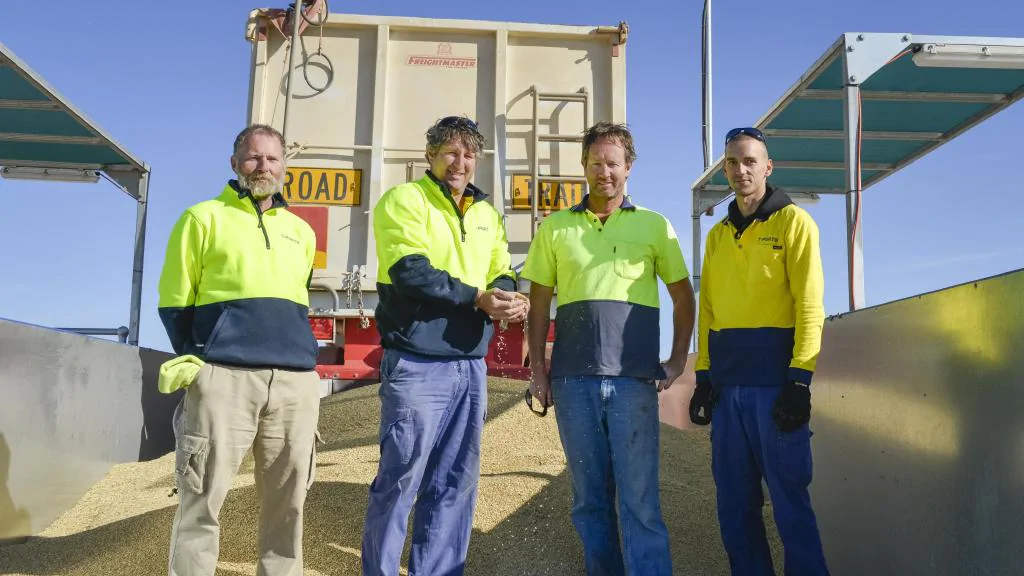 South Australia’s latest player in the grain handling market has established a freight network to give work to Eyre Peninsula carriers year-round.

T-Ports has just kicked off its first harvest on the Eyre Peninsula, with its new grain receival and storage sites at Lock and Lucky Bay already taking in about 25,000 tonnes.

Grain received will be exported through T-Port’s port facility at Lucky Bay.

The company will transport grain between its operations through a new partnership with local freight operators, titled the Eyre Peninsula Freight Group.

The group consists of a consortium of about 15 local freight companies with more than 40 trucks.

T-Ports general manager of operations Tim Gurney said by the company working with local freight operators through the partnership, the drivers would be able to get maximum use of their trucks year-round, increasing the value of their investment in heavy vehicles.

“Since the start, T-Ports has been adamant about supporting Eyre Peninsula businesses and the Eyre Peninsula Freight Group is that commitment in action,” he said.

“We need to get the grain as quickly and efficiently from wherever it is in our network of bunkers to the port in order to meet shipping demand. By having a team of flexible, like-minded carriers we can call upon, we will be able to continue our business operations while supporting their local business and community.”

“It’s perfect for us as we don’t need to rely on the ad hoc seasonal work but we can be using our trucks all year round,” he said.

“We have carriers from Kimba, Lock, Ceduna and Cowell so with T-Ports setting up the group, they’re really supporting a lot of local business right across the Eyre Peninsula.”

The Eyre Peninsula Freight Group was officially launched last week to coincide with the increase in harvest deliveries to T-Ports sites.

T-Ports has also made changes to its operations to enable growers to capture more value for their grain this harvest.

Active binning has been introduced at T-Ports’ Lock and Lucky Bay site which enables growers to potentially achieve higher grades for their grain even if the specifications fall just outside receival standards.

“We have been listening to grower feedback and are pleased we’re able to implement the active binning at both our sites to enable growers to achieve maximum value,” T-Ports chief executive Kieran Carvill said.

“We’ve also increased the number of segregations we can offer at Lock.”