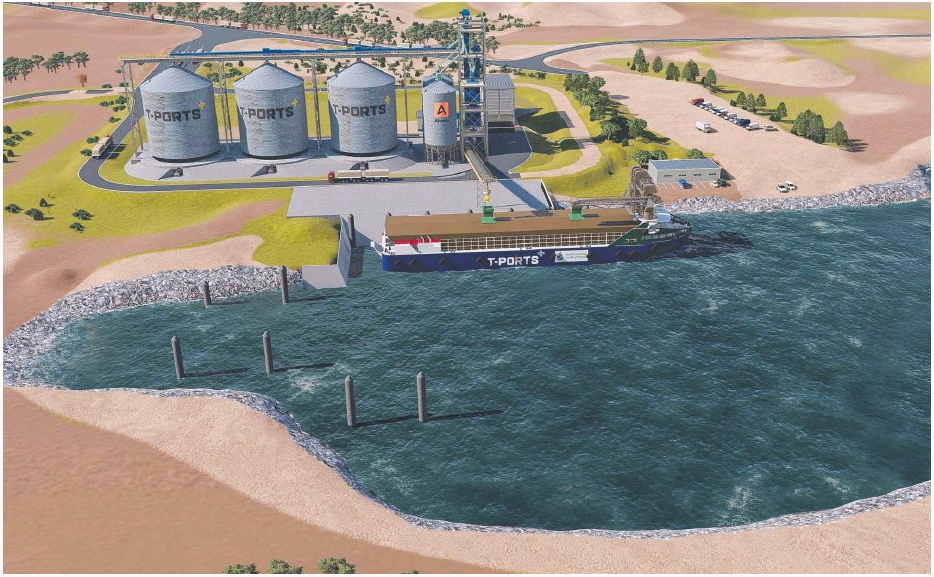 A $130 MILLION new port on the Eyre Peninsula is set to become a game changer for the movement of agricultural and mineral products across Australia. Bringing the “port to the product” is the simple philosophy underpinning the transformation of Lucky Bay into a revolutionary shallow water port that will serve as a giant grain storage and export point. About 70 jobs will be created at Lucky Bay once the port, which has a 360,000 tonne bunker site already in place plus another 140,000 tonne capacity in nearby Lock, is up and running from November.

The project is run by the Adelaide headquartered ICAM Duxton Port Infrastructure Trust and managed by development and operations outfit T-Ports, which is headed by Kieran Carvill. “We are taking modern day technology to go back 150 years to decentralise infrastructure,” he said.

Key to the enterprise is a $26 million boat, the 87m long, transhipment vessel (TSV) the Lucky Eyre which can carry 3500 tonnes per trip and which will be able to come right into the shallow water loading area (it needs only 4m of depth) at Lucky Bay. Once it is loaded – which can be up to four times daily – the vessel will transport the load to a much larger boat about five nautical miles offshore for export. Benefits from the new lower cost model which eliminates the need for major jetty structures – a deep water by comparison will require infrastructure worth about $800 million – are many said Mr Carvill. “There’s a lower capital expenditure, it means less hurdles for ports. I think people are beginning to realise TSV is the future of port shipment. It reduces infrastructure costs and the average road haul. There is a lower eco footprint and it’s cheaper, you can move big amounts without a high infrastructure cost,” he said. “If you have TSV technology, why would you build another deep water port? It changes the future.” TSV has existed for a long time Mr Carvill said, it being the small changes that propel it forward. “All Lego builds started somewhere else, we are changing the paradigm,” he said. Mobilisation has started he said with a haul road between Lucky Bay and Lock is now being built. Above ground building will begin next month with the first heavy machinery onsite to construct silos, material handling systems, a conveyor belt to the vessel, power generator units and diesel storage with an October completion expected. The Lucky Eyre which is currently in Shanghai, will arrive in September.

ICAM estimates that grain exports through Lucky Bay will be up to 40 per cent cheaper on average for the growers than via existing supply chains. There will be road travel reductions of up to 170km in local haulage distances when moving grain to Lucky Bay compared to the present Port Lincoln destination. ICAM managing director Freddy Bartlett said that Australian specialist lower-middle market investor Arowana, has provided a $50 million collateralised senior term loan facility while a new equity search will begin within weeks to bring in further capital for future expansion. He is hopeful the project, once it has been successfully rolled out on the Eyre Peninsula, can be replicated throughout Australia “This is a highly innovative and dynamic project and so we’ve been pleased to partner with Arowana’s investment team, who bring an astute commercial approach and add significant value to the project from their deep commercial experience,” Mr Bartlett said. “They have shown intelligent flexibility to work with us on the solutions necessary to make this pioneering SA infrastructure project a reality.”

State Premier Steven Marshall has praised the project. “SA has a fantastic history of leading innovation in the agricultural industry,” he said. “This strong private investment in innovative regional infrastructure at Lucky Bay will further accelerate one of our state’s key export sectors.” Arowana’s head of debt investments, Dustin Cappelletto, said key investment considerations included the compelling local catchment area economic combined with the low capital expenditure of the shallow water port model, experienced management and the support of the State Government.

Arowana has supported the capital raising venture via a fund that focuses on direct lending to high quality Australian SMEs. “These borrowers increasingly cannot rely on banks for competitive, responsive financing solutions,” Mr Cappelletto said. “This deal forms part of Arowana’s broader strategy of supporting Australian SMEs with innovative financing tailored to their specific requirements and ultimately becoming one of Australia’s premier non-bank lenders.” Mr Cappelletto said in the post royal commission reality, large banks were further restricting business lending activities, driving a substantial increase in the unmet financing need of great Australian SMEs. “On behalf of our investors we are proud to take the place of the banks and support growing companies by reinvesting capital right back into the local Australian economy – a cycle we believe has a fundamentally positive impact for all Australians,” he said. “This project is great for the region’s farmers and has precisely the type of social and economic impact we look to achieve.”

The new model will not stop at Lucky Bay with Wallaroo, positioned on the opposite side of the Eyre Peninsula, the next project in the pipeline and set to be built in around two years time. It will also use shallow draft facilities in conjunction with the same TSV to export grain. As with Lucky Bay, a further 70 jobs, post construction, are also expected to be created at Wallaroo. T-Ports is also in discussions to export up to 500,000 tonnes annually of kaolin through Lucky Bay to begin early next year while discussions are also ongoing over a separate fertiliser import contract for up to 200,000 tonnes annually.

ICAM has already gathered 377,000 tonnes of grower commitments from 120 growers to use the port in exchange for equity in the port over the next seven years. Lock grain grower and T-Ports board director Andrew Polkinghorne said the Lucky Bay project would provide welcome competition to the supply chain for grain exports from the Eyre Peninsula. “The benefits of this project will flow through to farming families and their local communities, as they secure equity in the port’s trust and, a share of the profits of storing, handling and exporting their grain.”